Why do I need evidence? The Johnny Depp trial is a lesson in evidence gathering 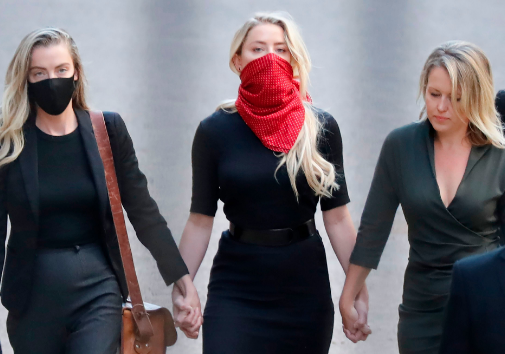 In London, Johnny Depp is suing The Sun newspaper’s publisher, News Group Newspapers, about an article in 2018 saying he’s a “wife beater” and that he attacked Amber Heard during their relationship.  He denies it. The Sun obviously thought they had the evidence to back up the story and were on safe ground. Their lawyers will have reviewed the decision to publish.

Johnny Depp is seeking huge damages and is trying to portray Amber Heard as a scheming liar who had been deliberately manipulating the situation in order to collect damaging evidence against him over the years. He says he was being attacked and abused by her not the other way round.

The trial is continuing as I write and there’s a mass of evidence emerging. Here are links to some of the top stories about the Johnny Depp trial:

The Daily Mail reported that the High Court was shown a video of Johnny Depp smashing up the kitchen and throwing a wine bottle in a  drunken rage at Amber Heard while he told her ‘You wanna see crazy? I’ll give you fucking crazy.  But he denies ever hitting her.

He rejected claims he had been violent towards Heard, 34, but admitted drug taking had caused a ‘lot of pain’.  He denies he behaved ‘like a violent monster’ towards his estranged wife. Read the Daily Mail article.

The Sun described Depp as ‘OFF HIS BOX’ and reported his ‘booze & drug mayhem laid bare in images of him passed out on the floor, with drug paraphernalia including four lines of cocaine visible along with a glass of whiskey and a pill box marked “Property of JD”.  Read the Sun article.

The Mirror reported that Johnny Depp denied inflicting a huge bruise on Amber Heard.  He was shown a picture of Amber Heard’s arm with a bruise during the second day of his libel trial but said he was not responsible for the injury. Read the Mirror article.

So, on the one hand there is Ms Heard’s evidence in the form of photographs, video 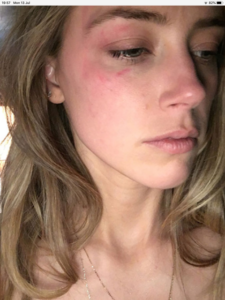 and audio recordings and texts that seem to show (I have to say ‘seem’ because clearly the Court must decide what they show and it’s not for me to pre-empt the judgement), firstly, that Johnny Depp threatened and did some violent things, secondly, that Ms Heard had injuries and, thirdly, that some of Johnny Depp’s violent behaviour seems to have been focused on, if not aimed at Ms Heard.  None of this evidence is absolute proof that he did actually hit her.  For that there would need to be the missing link of a witness who saw him do so (or a video/audio recording of it or a sworn confession).  But all these records appear to corroborate her allegations that he did.

On the other hand Johnny Depp’s defence seems to be simply to deny that he hit her, to suggest someone else did (an apparently mild mannered billionaire in this case) or that she inflicted her own injuries.  He also suggests that if he went crazy it was because she deliberately provoked him although this would not be a defence against violence towards her.  He is also producing some witnesses who will say that he was never violent to them.  Apart from his denials, none of this is evidence that he did not hit Ms Heard.

This is not a trial based on ‘he said/she said’ where the judge has to decide who’s word to believe. The evidence having most impact on the journalists who write about these stories comes from the photos, recordings and other supporting evidence produced by Amber Heard and there is no doubt that these things happened. We will have to wait a few more days until the trial ends but I’ve no doubt this evidence will play a large part in the Judge’s judgement too.

Here’s what you can learn from this case:

Collect evidence of the things that happen

This may seem to be a statement of the obvious but if you need to build your case, collect actual evidence just like Ms Heard has done.  What does that mean?  Firstly prove that a thing actually happened. It’s the things that happen that are the evidence, not your feelings or fears about them. But just saying something happened is weak evidence so a photo, a video, an audio recording or a witness that confirms something happened is gold dust. Our ONRECORD evidence gathering app is here to help – download it now.

Prove that the other person did it

Secondly, and this is where Ms Heard may be struggling, gather any evidence to prove that the thing that happened (in her case bruises) was caused by the other person.  Simply alleging someone in particular caused bruising leaves wriggle room and the possibility of surprising claims about ‘walking into a door’ or, in Johnny Depp’s case, that some other billionaire boyfriend with no apparent record of violence did it.

When you start to be in trouble, start to collect the evidence

Keep a record every time something happens because you won’t remember it all, you never know when you might need it – and don’t give up. Amber Heard was obviously given this advice years ago and took the time to collect a mass of evidence which could well prove what she’s been saying is true.